This is the eigth post of a series which regards the development of malicious software. In this series we will explore and try to implement multiple techniques used by malicious applications to execute code, hide from defenses and persist.
This time we will implement a COFF object file loader, which is similar to BOF (beacon object file) feature of Cobalt Strike. This has been also tackled by TrustedSec.

The code is in my GitHub repo.

Note: We are working with 64-bit code here.

Generating an executable from C/C++ source code is a three-step process:

An executable can be either natively executed by OS loader or injected into memory (for example via process hollowing or any other applicable technique).

But what if we could execute object files? Actually this is possible, since these files contain the actual machine code we’re interesed in.

Common Object File Format is a executable code format originating from Unix. Microsoft created their own variant of COFF and PE format based on that. [Microsoft documentation] contains a miture of information regarding COFF and PE file formats.

Sections may contain relocation information which specifies how section data should be modified by linker and then during loading into memory. For example .text section with assembly has information specifying what parts of code should be replaced and what should they reference in memory. More on that later.

We need to browse the COFF file contents and extract assembly along with relocation data and perform relocations. The final code (with relocations applied) can be executed by just calling it as a function (((void(*)())(code))()) or with (for example with CreateThread).

MessageBoxA function is located in user32.dll - we need to hint the linker about that.

Normally, .lib files are static libraries containing code (actually object files) that can be statically linked to an executable. However with dynamic linking linker uses special .lib files which point to relevant dynamic libraries - this information is used by linker to build the Import Address Table of an executable.

This can be done either by changing the project options in Visual Studio or using the following directive:

I disabled compiler optimization (/Od) for this piece of code. Enabling optimization resulted in different data arrangement in the object file and caused problems with my PoC COFF loader. Further testing would be required.

Compilation using MSVC compiler (cl.exe) produces an object file (with .obj extension). We can analyze its content using dumpbin tool shipped with MSVC. Let’s see some of the tool’s output.

Here are linker directives, most importantly information on which libraries should be browsed for external functions. 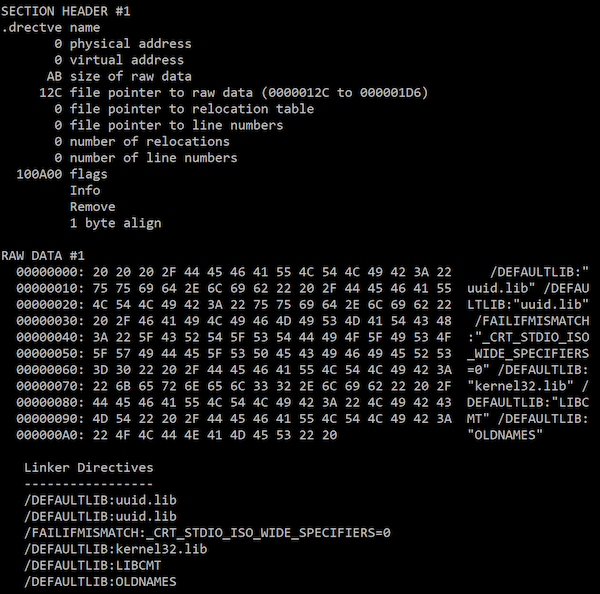 This is statically initialized data, for example string literals.

This is the actual assembly. In my example this section has been named .text$mn by the MSVC compiler. 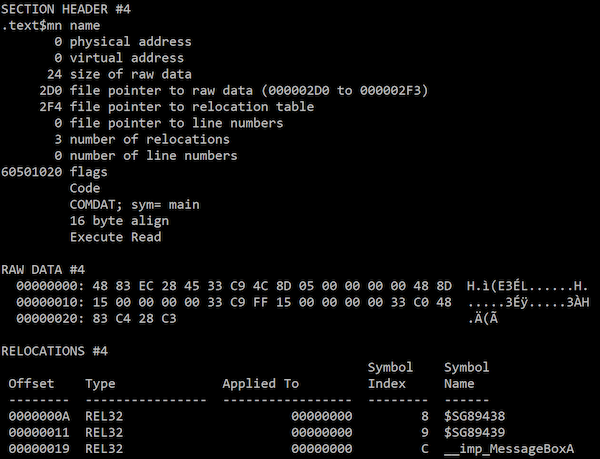 This is where things get more interesting, let’s disassemble the code:

We see here how MessageBoxA arguments (int 0, char* “Content”, char* “Title”, int 0) are passed according to the x64 calling convention.

Let’s take a look at the third instruction (located at offset 0x07. When disassembled using for example ShellNoob the instruction uses 0x00000000 offset:

So how does the dumpbin disassembler knows that function should reference a symbol? That’s where relocations come into play. Below the .text section raw data we can see relocation information. For example, first relocation table entry says that 0x00000000 bytes at offset 0x0A (which is the second operand of lea instruction) should be replaced with actual (relative to RIP) address of symbol no. 8.

The same goes for the call instruction at offset 0x17 along with respective relocation entry and symbol. However here relocation concerns relative function address address. That’s right - relative address (call operand) gets dereferenced and the value stored there (actual MessageBoxA address) is called.

When the code gets loaded into system memory, loader parses relocation data and puts functions and data addresses in right places. However this happens during PE executable loading. We want to load the COFF object file, so we need to analyze it and perform in-memory relocations.

This table contains symbols such as static variables or external functions.

The symbol table is a bit tricky to read and understand. However usually the Value field indicates the offset of the symbol within the section (described by SectionNumber field).

Also, to know where one symbol data ends, we need to check the offset of the next one in the same section or total section size.

To inject and execute a simple COFF file we need to read the .text section and fill all zeros with relative addresses of external functions and static data (i.e. relocate symbols referenced in this section). Of course we also need to place these symbols somewhere in memory, for example after the assembly.

To find external functions we will need to browse libraries indicated in linker directives. We can use LoadLibrary/GetModuleHandle/GetProcAddress functions or for example browse PEB and InMemoryOrderModuleList (see part 4).

The diagram below illustrates this concept: 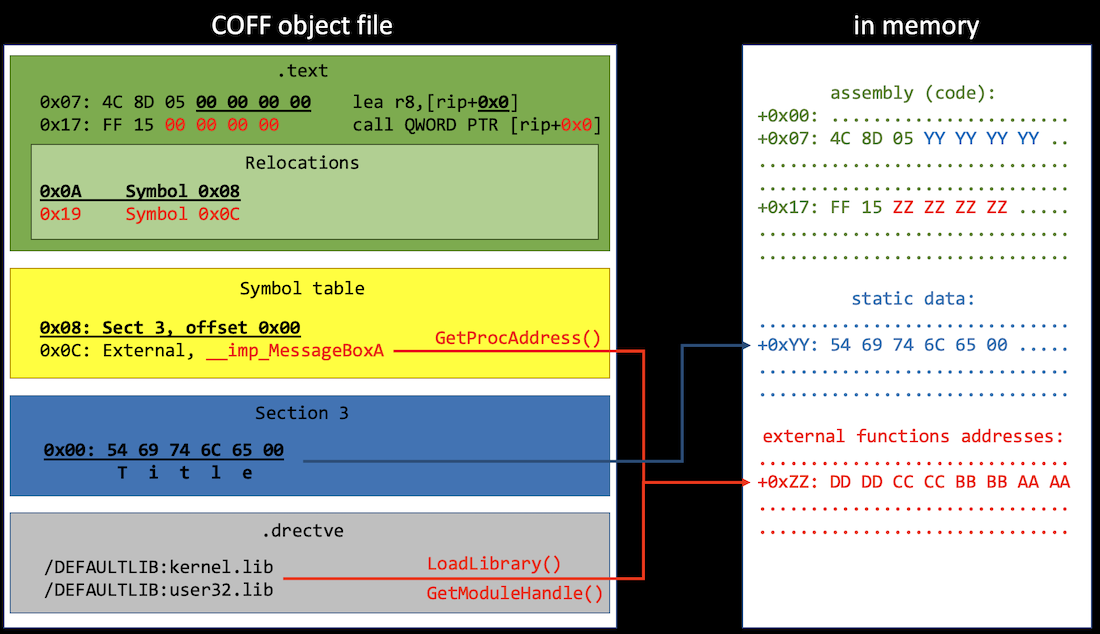 I used COFFI library for parsing COFF files. This is a great header-only C++ library which has all functions I needed to read stuff from the object files. COFFI uses some of C++ Standard Library data structures like strings, vectors etc., and so does my code.

Cobalt Strike’s BOF implement a set of functions which can be called from the injected object file code (aka Beacon API). We can do it, too.

The object file loaded can have an internal function defined, for example:

and added as an import to the object file code:

When calling the injected main function from an object file, we can access the returned value from the caller:

We’ve gained understanding of COFF object file format produced by MSVC compiler. Since these files contain all information needed to execute the code, they may be as well injected and executed in memory, delivered for example over a C&C channel. This is a powerful technique that surely poses a challenge to malicious code detection capabilities.

The code is in my GitHub repo.